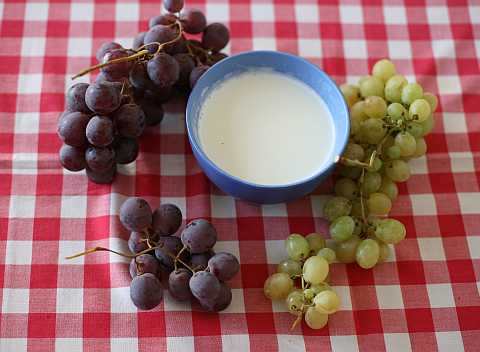 Ajo blanco (White garlic) is a delicious variant of the Andalusian gazpachos. It is a dish coming from the Andalusí kitchen inherited from the Arabs. The protagonists are the almond, the garlic and the olive oil. The most genuine recipe was preserved during centuries in Malaga. It is very popular in the region of the Axarquia, where it is consumed even more that the Andalusian gazpacho. In the Malaga version, that is the one that appears here, usually is accompanied by muscatel grapes. The secret is the quality of the almond, that must be fresh and from the same year. of the almond, marble mortar with wood mace, until obtaining a milk that will be mixed, to mace blow, with garlic, the bread and the salt, soon to emulsionar it with the olive oil.

Put the almonds in a dipper with cold water for several hours until the peel gets off. Some people try to accelerate the process using boiling water. It is a mistake as it spoils the natural taste of the fresh almonds. It is true that not many people can feel the difference as they have not developed a cultural pattern of the real ajo blanco taste.

In a mortar, smash and mix the garlic with the salt using the mace. When garlic is turn to pulp, add the almonds and smash them as well until everything has turn an homogenous dough. Then add the crumb of the bread previously soaked and continue removing. When everything is mixed start adding the oil, little by little until the it is emulsified with the rest of the mass. After that, Incorporate the vinegar (and continue moving) until obtaining a thick sauce, of aspect very similar to the one of the mayonnaise. Then add very cold water very slowly until getting the desired texture. Correct the salt and vinegar and serve it with peeled grapes (In the country the peasants do not bother and eat them unpeeled and with the seed. It is healthier).

Some people prefer a modern and quicker version without bread, normally made in the mixer. 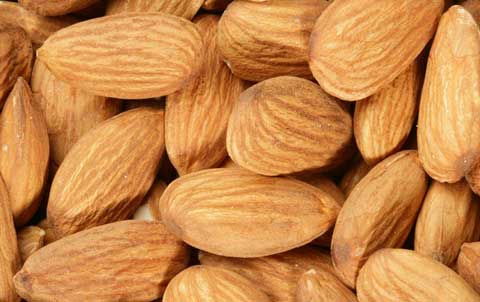