↓
Home→Mediterranean cuisine→Gazpacho Andaluz, the most popular Spanish starter (and one of the icons of the Mediterranean Diet): Andalusian Gazpacho
Updated on March 20, 2017 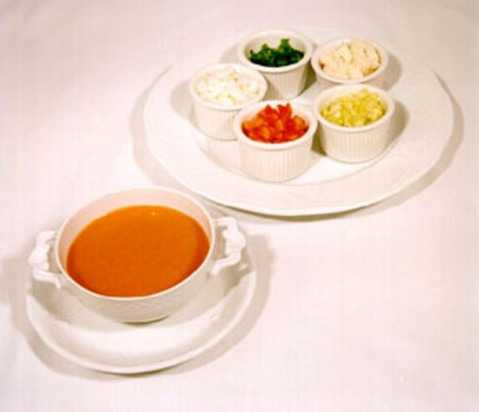 HOW TO PREPARE THE ANDALUSIAN COLD SOUP

Put the bread which has been previously soaked in water and drained into a stainless steel dish. Clean the peppers, the cucumbers and the tomatoes. Peel the onion and keep it for the garnish. Remove the pepper seeds, cut them into medium size pieces, except the ones to be used for the garnish. Peel the cucumbers and slice them all except the ones to be used for the garnish. Keep aside the tomato for the garnish and cut the rest into pieces. Add the tomatoes to the bread, the peppers and the previously prepared cucumber. Add the garlic which has already been peeled, and the salt, oil and vinegar. Mix well. Add a bit of water and liquidize in a mixer. Put it through a strainer adding water every once in a while. Add seasoning and allow to cool.

For the Garnish
Dice the cucumber, tomato, pepper, onion and the bread. Serve on separate dishes.