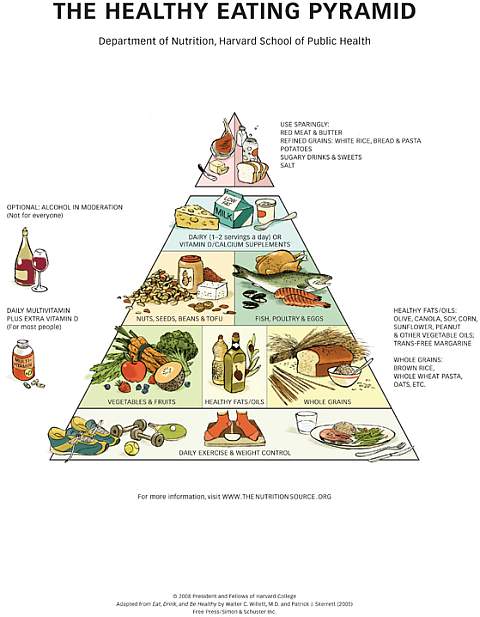 Talking about food pyramid picture is talk about the “food pyramid fight” that is being developing  for decades.  A fight that always grab the attention of any war journalist. A fight for a cake of 1000 billion US Dollars is taking place all over the world, but more particularly in USA (more than 500 billion). The U.S. Dietary Guidelines are the basis for the school lunch program apart from other important federal nutrition programs for hospitals, nurseries, military kitchens and everyday shopping list of normal consumers. Food industry is very much concern about these issues and a lot of lobbies are working at forced march.

In 1992, The USDA released its Food Guide Pyramid. It was a model in form of illustration of what should be considered the pattern of an healthy diet.   They started teaching it at schools and printed in millions of brochures. They also displayed it in tv programs, in thousands of articles and also included it in food boxes and cereal labels.

The problem is that the United States Department of Agriculture Pyramid did not represent the scientific opinion about this important issue. The model relied in inconsistent evidences but in very powerful influences of food lobbies. See My Pyramid.

Dr. Willett and his team from both institutions have designed their own pyramid, known as the Harvard’s health pyramid. It is based entirely on the scientific studies, not in economic interests, and emphasizes exercise, whole grains, non saturated plant oils, and a reduction in white rice, pasta, and potatoes. It also recommends the regular and moderate consumption of alcohol (beer, wine, or spirits) for all adults unless there are medical or other reasons to avoid drinking.

The Harvard’s Pyramid recommends less red meat that the U.S. Dietary Guidelines. It is very similar to the Mediterranean Diet.