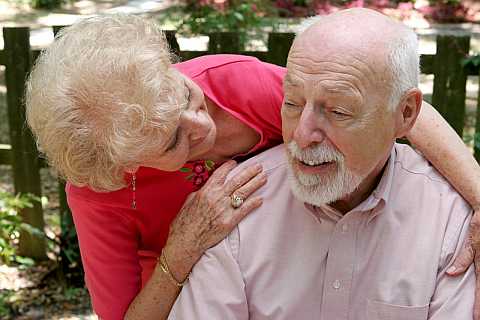 John and one of his daughters

Yesterday my friend John celebrated his 100th birthday. He woke up at seven as usually, drank a small glass of natural orange juice, put a training suit on and went jogging, accompanied by his eldest great-grandson. One hour and three miles later, he came back home and had his breakfast, after a relaxing shower. He had green tea, skimmed milk, and a homemade muesli made of grinded oats, nuts, raisins, yoghurt and sunflower seeds.

But for John this was not a normal day. At home, they were preparing an anniversary celebration with the entire family. They were organizing a lunch party and his routine diet would be altered a bit. But there were still five hours ahead to make a good and quite digestion.

It is not very common to attend a birthday lunch like this. So, I called on John early in the morning to have the opportunity to discover more secrets and tips about his longevity and excellent health. I helped him to crack the nuts and joined him for breakfast.

He always says that he has no secrets. He is convinced that the main reasons are regular physical and mental exercise, and proper nutrition.

I asked him about his normal life routines. I knew a lot about it, but in these conversations you always discover a new and different detail.

As I expected, he told me that he usually works at the computer in the morning, answers the mail, writes to new friends (most of old ones have passed away) and plays chess against his seven years old great-granddaughter, Jimena (it is a very ancient Spanish name. The first references are from the beginning of X Century and even Cid Campeador’s wife had it). Chess is something that he uses to keep his brain in shape. I didn’t know his hobby. He said he had been decades playing chess, either with friends, against computers or even online. Three years ago started teaching this sport to his great-granddaughter.

The next part of the routine is watching TV at 14.00. At this time he has a piece of grapefruit and after that goes to bed for about one, or one and a half hours.

At four o’clock he goes shopping. He still has a valid driving license, but prefers that a member of the family drives the car. Anyway, most of the days goes walking, using a three wheels shopping trolley. He selects the fruits, vegetables and sometimes fish.

At six o’clock John has dinner. He starts with a big bowl of mixed vegetables (tomato, cucumber, celery, fennel, apple, carrot, etc.) He continues with grilled chicken, fish, or eggs.

Later he may watch news, read, or talk to the members of the family. He only goes to bed when he feel sleepy, not before. Anyway, he will get up the following morning at the same time: seven o’clock. The tip I discover that day is that, sometimes but not always, about eleven o’clock, he takes about three ounces of fresh pineapple.

But yesterday he broke the routine. The whole family (some friends like me included) enjoyed a Mediterranean lunch. There was a delicious big paella as the main dish, and many other delicacies that had to follow an extremely John’s strict rule: everything had to be natural and homemade.