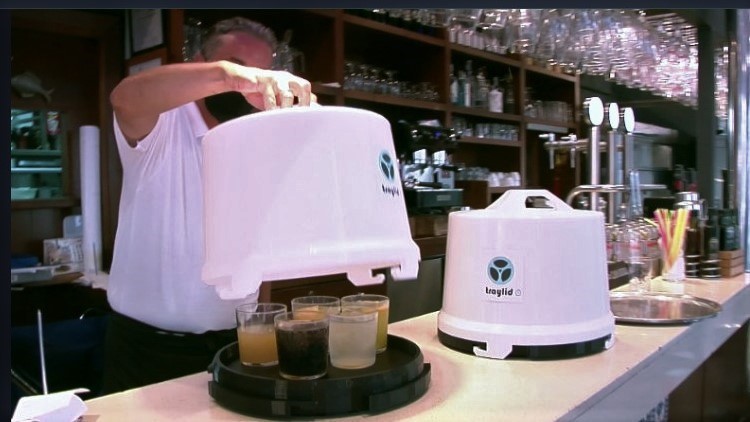 Traylid is not just an anti-Covid-19 tray. Traylid is a concept. It constitutes the backbone of what could and should be the ultimate health and security protection system for consumers against COVID-19 and other pathogens in the catering scene which ultimately requires the total isolation of food and drinks from any form of exposure or contamination throughout its complete transit from the safe preparation areas to its final destination, the customer.

Currently, in addition to the preexisting standards, big efforts have been made on the implementation of new and effective security measures involving aspects such as the conservation of the foods and beverages in bars, restaurants, hotels, cruises, etc. as well as its handling by the personnel in charge of its preparation and even the way these products are delivered to the serving personnel. However, a huge security breach still remains unsolved in the system due to the vulnerability and exposure of the foods whilst sitting unprotected on an uncovered tray during their journey from the bar or kitchen to the customers table.

It is undeniable that in the majority of cases waiters must carry uncovered and unprotected trays full of food and beverages ,also unprotected, for considerable distances through indoor or outdoor environments which are contaminated by human presence, by their breathing, coughing, laughing and close contact as well as by city air pollution, insects or even bird droppings.

All relevant agencies responsible for health, starting with the WHO, unanimously acknowledge the airborne transmission of the virus, and strongly recommend that foods are always protected from any form of exposure. Proposals have already been made aimed at creating safe and clear corridors for the circulation of waiters carrying trays. The World Health Organization itself is concerned and investing time in elaborating manuals on how pastry and pastries should be isolated in hermetic boxes.

The bottom line is that ,whatever the reason, – no one has yet come up with a feasible and safe solution to this worrying problem related to the aforementioned dangerous journey that our pizzas, sandwiches, coffees, beers, etc. must undergo before reaching our tables…

Health agencies and society are starting to realize that our security cannot rely solely on a waiter wearing a mask. In fact, wearing a mask for more than an hour is an unbearable task for anyone not to mention the sheer torture it means to a professional waiter having to do it for 2 or 3 hours rushing in and out of a kitchen, or bar ,carrying trays fool of food and drinks. There is already serious medical reports that strongly advise against the use of masks for more than an hour and warn of possible illnesses related its overuse.

CONSUMER, one of the biggest food distribution companies in Spain, has a pretty clear vision of how the catering business should operate in the future. After conducting their own research they have prepared a series of reports that have concluded, amongst other recommendations that,- “food should be covered by containers or lids.” and “the meals served at the table should be protected from the moment they are cooked until they arrive at their destination.”

Traylid is the ultimate solution because its effective, practical, safe and affordable. A single lid can be combined with eight or ten trays that will be deposited and retrieved from the tables with a single movement and requires almost no training .Unlike traditional trays, which require years of experience, it can be used without error right out of the box. They are comfortable, intuitive and safe, and can be handled extremely easily as the centre of gravity is far below the point of attachment. An inexperienced waiter can easily carry two without much effort, thanks to its design and the pendulum effect it generates which prevents food and – especially drinks – from abandoning their containers.

AT THESE MOMENTS WE ARE WORKING TO MAKE TRAYLID AVAILABLE TO YOU.

WE WILL CONTINUE INFORMING. https://traylid.com/