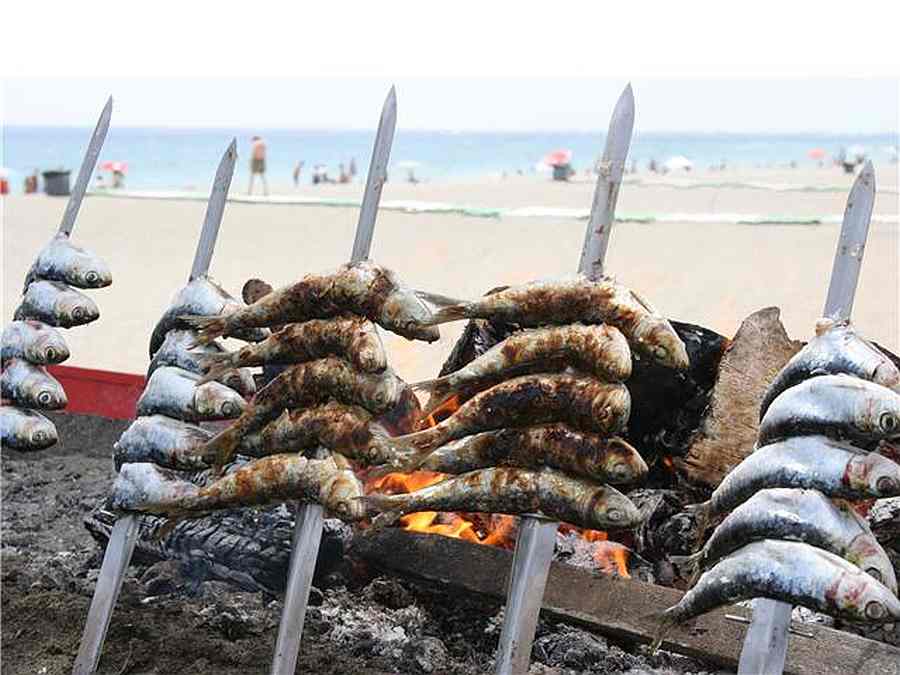 One of the types of fatty fish in the Mediterranean Diet: Sardines.

Mediterranean Diet has a little of everything in it. The name was really a creation out of the amplified world region where it was really discovered: The Island of Crete. And it was largely the result of circumstances beyond any plan or design. The circumstances in which the population had to live: poverty and limited resources.

What they used to eat?

They had plenty of cereals, vegetables, some fruits like grapes, olives, wine, small fatty fish, eggs, milk, yogurt, dried fruits and nuts, cheese and something very extraordinary: Olive oil, virgin olive oil as they didn’t have any means to refine pomace. Sugar was very scarce. A rarity.

They used to eat very little meat. From time to time, “rich people” used to kill a free-range chicken. Sometimes, it could be a goat.  More frequently, several times a week, they used to cook legumes mixed with vegetables and pork conserves. Once a year, generally around winter solstice, they used to perform a pig slaughtering ceremony, the Choirosfagia, in which the sacrificed as many pigs as they could. This ceremony is inherited (still lives) from the old Greek tradition to worship Apollo in the same way and time of the year. All the meat, viscera, blood, skin was transformed in cured ham, lomo sausage, salami, chorizo, blood sausage, and many other pork products.

Anyway, one of the most important source of daily calories was bread and olive oil. They were the traditional “snacks” and sometimes no much more.  Bread and oil could reach until 40% of the calories intake in certain segments of the population.

As the same time, physical activity was very intense, generally men working as a peasants and women as housewives. Almost all day long.

Actually, the same thing was happening all around the Mediterranean Basin those years.  This is the reason why the pattern was called “Mediterranean Diet”.

This was the Crete that visited Dr. Keys team in the late 50’s.

In 1965 Dr. Ancel Keys, after completing the “Seven Countries Study” divulged the fact that in Crete, where 40% of people food intake was olive oil, the heart diseases were considerably low. The research covered more than 12.000 persons from Finland, Greece, Italy, Japan, Holland, USA and Yugoslavia.

A few years later, the “Mediterranean Diet” was born.

In reality, there is not an exact formula for the Mediterranean diet, but olive oil, vegetables, cereals, legumes and physical activity were the most significant common factor.

About eighteen countries border the Mediterranean Sea. Countries with very different cultures, religions, ethnic background, economy and agricultural production. It’s difficult to say that there is only one Mediterranean Diet. Anyway, the common Mediterranean dietary pattern had these characteristics:

Olive oil was the most important fat source and almost the unique vegetal oil used.

The proportion of dairy products, fish and poultry was low to moderate. They did not eat red meat.

Egg consumption was from one to four times a week

Wine was consumed regularly and was a habit in the meals, but in low to moderate amounts (except in Muslim countries).

Nowadays, the Mediterranean Diet has almost disappeared in many of these countries. Obesity is becoming a problem and cardiovascular diseases are rocketing.  We are trying to preserve the pattern of those years as a legacy for the future.

By the way, many people, even Institutions as Empowered Hospital write:

The correct spelling is: